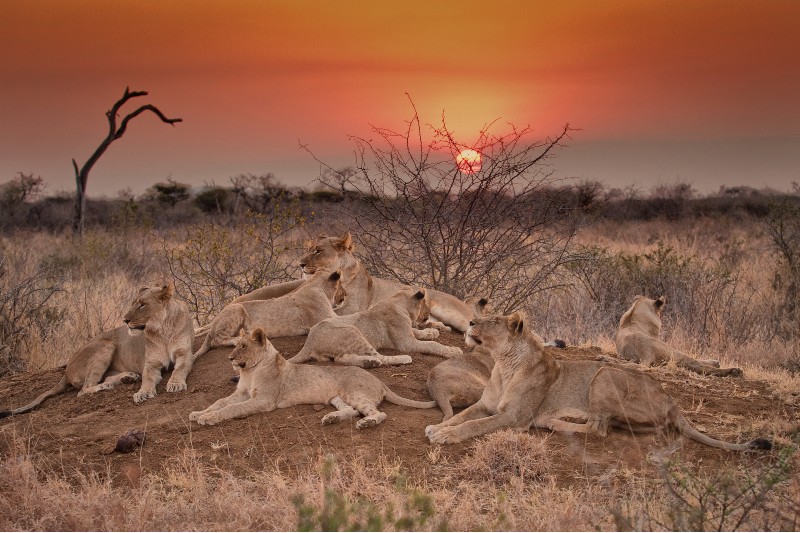 For a luxury safari honeymoon in South Africa, The Royal Madikwe has it all and more…

There’s something so incredibly opulent about a safari honeymoon. And although you’re closest to animals in their natural environment, it feels other worldly to be up close and personal with nature’s most beautiful beasts. Madikwe Game Reserve is perfect for honeymooners seeking a safari experience with a little seclusion.

Unlike Serengeti or other national parks, here there’s a strict policy of no more than three 4×4’s being allowed near animals at the same time. The malaria-free private reserve used to be cattle fields and is now only open to guests staying at one of the lodges so, while home to the Big Five (Lion, Elephant, Buffalo, Rhino and Leopard) you won’t come across private vehicles at all.

A driver from The Royal Madikwe luxury camp helps us transfer through the reserve. On the way towards our new home for the week we spot Ostrich and Go Away birds. Manager Elaine is the most welcoming host, and checks us in. Only 12 guests can be housed at the lodge in total (excluding the Sovereign Villa which is designed for six guests) and it’s worth splashing out on the Royal Villa. More so because 20 per cent of Royal Madikwe’s profits go to local schools and healthcare for the community. The lodge also organises a rhino fundraising walk during our stay to help raise funds for the reserve’s anti-poaching unit.

The Royal Villa at Royal Madikwe

Nothing prepares you for how amazing the suite is. Our lavish, rock-star abode in the savannah offers peace and jaw-droppingly spectacular style with faded teak furniture, stone coloured walls and ornate hand-carved wooden doors. Upstairs on the mezzanine floor, is a large living room, library and huge flat screen equipped with Netflix and plenty of DVDs. The complimentary mini bar and wine coolers in the kitchen and each of the two bedrooms are filled with every beverage possible as well as the best South African wines. Bedrooms have four posters draped in netting and filled with marshmallow-soft pillows. Honestly, sleep and top-end living has never been so peaceful. 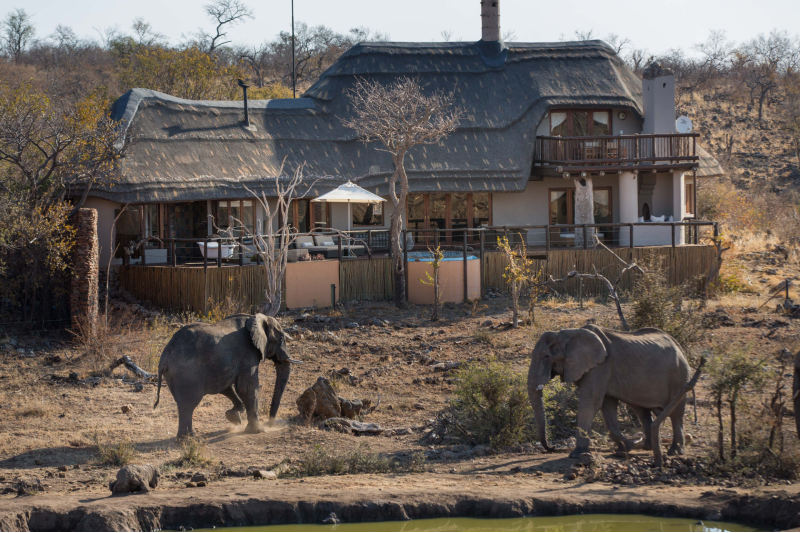 The 300 square metre private deck comes with a warm plunge pool and white day beds, outdoor dining table and brick BBQ and pizza oven. Every day, the scene below is a mosaic of honey, peach and russet-hued earth and thorny bushes as the watering hole nourishes herd of wildebeest and a lone warthog who loves wallowing in the mud. Showering outside, I watch as a big male kudu, a horse-size, spiral-horned antelope, grazes in a bush metres in front of me. Another morning, a 35-strong herd of elephants sashay past. And when I take a soaks in the outdoor roll top bath, a herd of giraffe inspect my hair-conditioning routine.

Doctor – our veteran ranger – picks us up at 3.30pm for the afternoon drive. He’s chatty, witty and a leader in the field so much so that other lodges often call out to see where he is. We spot klipspringer, waterbuck, impala and zebra and hornbills perched on trees. Meercats playing roly-poly in the dry land charm the life out of me. A group of baby wild dogs – notoriously shy creatures but unquestioningly Madikwe’s flagship species – let us watch them play rough and tumble. 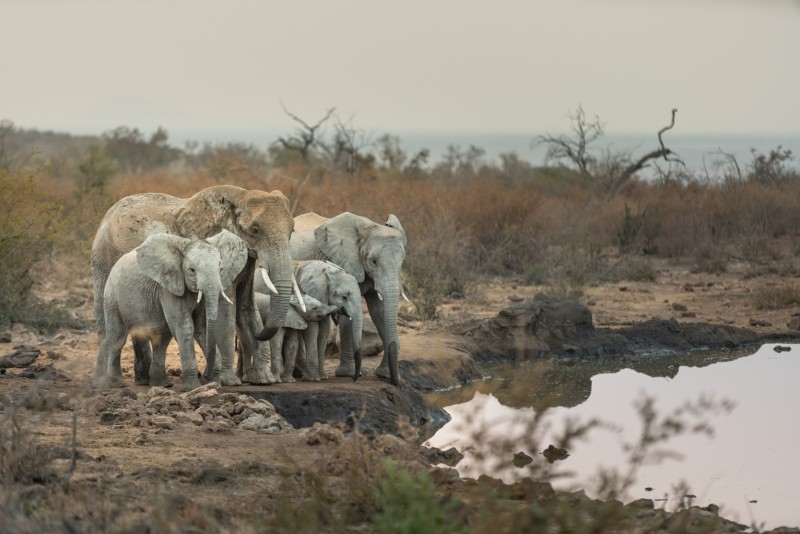 There are cobras, pythons and black mambas in the reserve, though we don’t see any. Doctor sets up a bar for us at sundown in the middle of the bush and tells us stories of his many adventures including that of his childhood growing up in a nearby village with whip-smart banter. He started his career as a tracker and clues us up on the surrounding wildlife. On our drive back, three chacma baboons scurry away into the bushes. When we arrive back at the villa after dark, our canopy bed is unfurled and homemade chocolates have been left on the pillow. The Olympic-sized jacuzzi bath is filled with floating candles and petals – it’s romance central.

The next morning we’re up and ready to meet the sunrise for 6am. Our adventures is injected with more adrenalin-inducing drama when we get up close to view lionesses on the hunt. It’s truly breath-taking to see them preparing for attack in v shape formation. Afterwards, I watch nervously as a male lion tears his recent wildebeest booty to shreds. On top of drives, Doctor serves us delicious Amarula coffees and hot chocolates with rusks.

One day, Doctor drives us to the border of the park from which we see Botswana. Here one of our best sightings involves watching rare black rhino grazing by a remote watering hole, wholly aware the sun will soon set. Nobody in the vehicle speaks for a full 30 minutes. Free from civilisation, I don’t believe many experiences can beat sipping ice cold G&Ts on an African safari. Served with gourmet crisps and corn nuts, I’ve developed a mild biltong addiction ever since. We stand in almost meditative silence watching the air glow pink behind a dusty haze and the sounds of nocturnal creatures rousing.

We’re spoiled for choice with chef Amos’ inventive and delicious culinary skills at dinner. Staff including James, Elias, Amos, Gift, Elaine and Valencia lavish us with genuine affection and friendship. On our first night, Gift points out that a rhino has come to the lodge’s second watering hole and puts on a flashlight so we can see. For dessert we’ve a freshly-baked, moist and fluffy vegan cake. It’s so huge we share it with staff.

We’re also presented with a Boma – a South African BBQ. Because Boma is such an elaborate and fun social affair, the hotel invites guests from nearby lodges. It’s an unmissable experience. On top of an already stellar soundtrack of the open bush and sizzling grills on the BBQ, we’re serenaded by the hotel staff. The harmonies filling the sky are so beautiful, I burst into tears. The meal – thrown in our honour and where we munch on expertly grilled beef, kudu, ostrich and springbok – is the most joyful of my life. Afterwards a group of bubbling frogs continue to serenade us throughout the evening.

Getting there and back

South African Airways flies daily from Terminal 2 at Heathrow Airport. Check in is easy and we then head over the beautifully designed Air Canada Maple Leaf Lounge at Heathrow Terminal 2 for some pre-flight champers where it is bright, airy with plenty of usb sockets to charge laptops and phones. The exceptionally polite and friendly air crew aboard our South African Airways direct flight from London Heathrow to Cape Town help make our overnight flight seamless and swift. Our seats in the middle of the plane have ample legroom space, an adjustable headrest and a comfortable seat recline which make for a decent night’s sleep. Dinner options include an impressive, generously-portioned gluten-free beef bourginon washed down with wine. There’s a perfect selection of the latest films and box sets. Breakfast includes very agreeable omelettes, croissants and fresh fruit with coffee.

Essential return transfers from OR Tambo Airport in Johannesberg to Madikwe Game Reserve were provided by the amazing Mayibongwe Travels – a registered transfer service. Driver, Charles, is reliable, knowledgeable and works closely with the South African Tourism Board.

10 Best Songs To Propose To

Father of the Bride Speech Guide

Estrella Silvester
Estrella is a a writer living in New york City, USA. She has written for bride dress, makeup and decorations.